India is a country where we are more into jugaad living rather than quality living and that’s what author Alpesh Patel discusses in his 283 pages long book Chalta Hai India.

The author has divided the book into 4 parts. Each part tackling one issue in its entirety. Every chapter thus deals with one subject and delves deeper into the “Chalta Hai” culture. Chalta Hai culture is basically quite evident. Even while posting about this book on Instagram I did come across #ChaltaHai #sabchaltahai #chaltahain like most used hashtags on IG! That’s how deep the culture of chalta hai is rooted in our system and mindsets. Jugaad is the key of life in India but for how long? As long as the jugaad stays in place it works but what about long term goals. In this rat race where every country is aiming to be a superpower we need to buckle up too but we are caught up in age old beliefs, traditions, philosophies, morals and what not. That’s how the Chalta hai culture begins and that’s what the author expands on in this book. 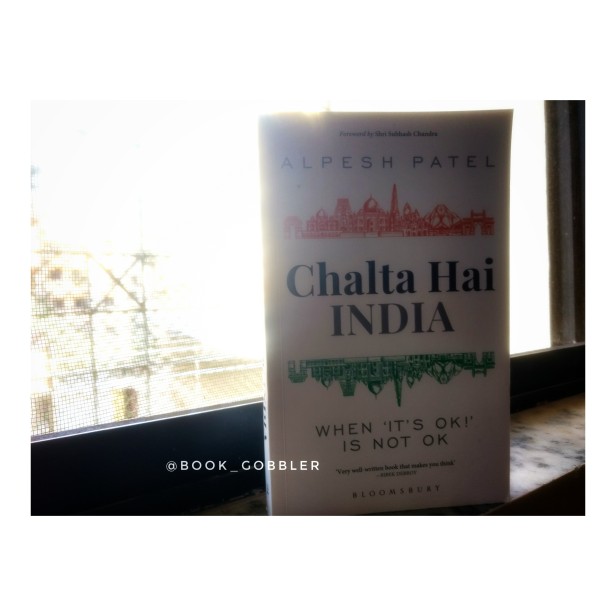 The language is lucid and the author has used analogies which help us understand the thought behind the “Chalta hai” (CH) attitude and how we can restrain it by the “not chalta hai” (n- CH). The author stresses that the problems exists in every country, much similar problems like potholes and traffic jams or road accidents, but how a government and it’s citizens handle the issue makes a lot of difference. The author uses certain parameters to measure CH and n-CH which makes understanding the issue easy. As also the word Chalta Hai is used in varied contexts and the author makes it a point to showcase the same through his book. The book goes on to point out how the western countries too have a Chalta hai culture but term it differently. It shows us the double standards of the westerners. For instance how Mahatma Gandhi wasn’t given the Nobel Peace Prize despite being nominated 5 times but Barack Obama was conferred with the same Nobel Peace Prize despite bombing many countries!

What I loved the most about this book is that it gives us a balanced view of the term Chalta Hai. It has multiple examples like the rise of Gulabi Gang, risk taking like Tata motors, quality awakening like Germany, which I found very inspiring. The author deftly convinces us how we, Indians, have had “low external awareness and very little outward aspirations,” with respect to the development. We are caught up in the web of our culture because in India development is hampered because the government doesn’t want to hurt the religious sentiments. We Indians resist change if it goes against our beliefs. For instance, the construction of wide roads is impossible if the temple in between isn’t razed!

Chalta Hai is “letting things be,” “it’s okay attitude,” “playing by the traditions and values,” “inaction,” “lack of quality awakening,” “jugaad”. Taking things for granted is Chalta Hai, free service is Chalta hai and it’s not okay to be okay. Change begins at home.

Overall, though it is a heavy read yet it is important in my view.